skip to main | skip to sidebar

Goodbye to a treasure

The weasel went out with the garbage.  It was an important member of our family but it had seen its day.  It had been sewn up so many times, that there was nothing left of its face.  When I found more stuffing hanging out of Cookies’ mouth, I decided the time had come.

It wasn’t an easy decision.  The weasel had been beloved for almost three years, from the day our two-pound puppy arrived.   Since then, we have accumulated a basket of toys and each one has a specific purpose.  There’s the comfort toy, the squeaky toy, the catch toy and the run-around- proudly-with-it-in-our-mouth toy and then toys that are fun to dig through while we look for the really useful toys.  The weasel was the tug-of-war toy.  It was perfect.  Light, long and easy to grasp.  It had a resilient spirit, a bit like the British during World War II.  Even so, there were times when I hated that weasel.  For instance, when I’d collapsed into a chair after a long day and was nursing a cup of tea.  The intrusion of the weasel came with a tap on my legs and a look down into round, brown beseeching eyes and tiny teeth clamped onto the weasel’s neck – always the neck.  The tail was left for my outstretched hand.

As soon as I grabbed the weasel’s lower extremities, my sweet little, now seven pound, dog, would turn into a ferocious competitor, snarling, growling and holding her own.  The book said that I should only let her win 10% of the time so that I can show her who’s boss – alpha dog and all that – and so the game went on until she let go and I threw the weasel as far as I could manage without spilling my tea.  If I were lucky, she’d chase after it and turn her attention elsewhere.  If I were unlucky, the weasel would return with agonizing regularity.

Still, you have to love an object that makes your dog so happy, which is why the weasel had so many remedial stitches in it.  I often tried to shift Cookie’s affections to the latest green toy – organic materials, water-based dyes, nothing harmful to swallow – but she has a strong loyalty gene and overlooked all the weasel’s shortcomings.  She loved it, warts and all.

It was a Thursday night when I decided it had to go.  I knew the garbage was being picked up early in the morning which ensured that I wouldn’t be tempted to try any messy retrieval.  I looked Cookie in the eye and placed the weasel in the bin.  It was the end of an era.  An era that had included two near-death experiences for my puppy but an era that also included falling in love with her older sister, learning how to swim, traveling on a plane, sleeping on the conference table so she wouldn’t be excluded from meetings and relishing a raw food diet.

The garbage trucks were there early.  Cookie and I both woke at 6:00 am to the dragging of the bins and the reverse siren.  I said a silent goodbye to the weasel; Cookie headed towards her toy basket.  After a few rummaging sounds, a turtle appeared on the bed.  It was small and light with four dangling legs.  Not a bad substitute.  Since then we’ve tried a number of animals – a frog with an elongated mid-drift, a mouse, a duck, an octopus and a camel.  So far, nothing has quite hit the mark but I know we’ll get there.  It’s clear that Cookie isn’t living in the past; she’s moving on with life. 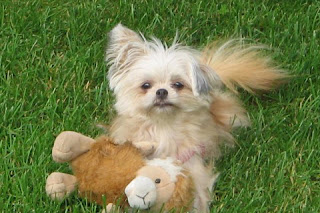 Posted by Jane Iredale representative at Wednesday, July 18, 2012 No comments:

We’ve always assumed that we know who our customer is and why you buy our makeup but last year we decided to clothe that assumption with some certainty and so we communicated with you in a variety of ways from social media to focus groups and everything in between.

What we found out confirmed a lot of what we knew but you also had some surprises for us. What you told us was that, yes, you wanted a makeup that looked great on the skin and that you knew was healthy and clean but you also told us what makeup meant to you and how it impacted your lives.

You didn’t use the words “beautiful,” “glamorous” or “red carpet” for example. You more than anything else described the way makeup makes you feel. You described how it lifted your spirits and got your day going in the right direction. It not only affected the way you felt about yourself but it affected how you interacted with the world.

And we learned that most of you don’t wear makeup for someone else; you wear it for yourself. Applying it is your “alone” time when you can shut out the busy-ness of life and enjoy who you are.

I was explaining all this in Stockholm recently to a group of salon owners who carry our line. Fortunately, everyone spoke such good English that I could get carried away without having to use a translator. I find that when I speak to a group, there are always a couple of people in the audience who give me something back, and so it’s hard not to keep making eye-contact with them. There was one young woman just like this in the front row. She was warm, bright and had long thick, auburn hair and beautiful skin. I was feeling very pleased that I could count her as a customer.

At the end of the session, we were taking photographs. She waited patiently in line and then came on stage for her turn. We smiled for the camera and then she aid: “What you said about makeup is really true.” “Do you see it with your clients?” I asked. “Yes, and with myself. I’ve just come through chemotherapy and radiation.” Stunned, I held her hand and admired her skin knowing what havoc chemotherapy inflicts on the skin’s condition. “It’s your makeup,” she said, "it doesn’t really look like this. When I go to the hospital with no makeup and no hair, I walk with my head down and don’t want to look at anyone. When I put my makeup and wig on, I throw my shoulders back and I’m ready to face the world.”

So, to all of you who toil for long hours to help people feel better about the way they look, what you do is important and integral to the way we relate to ourselves and with each other. And that goes for getting our roots done to covering up under-eye circles.

And for those of you whose lives are full of caring for other people and don’t have time to do something nice for yourself, try to make the time; your immune system could use a boost. 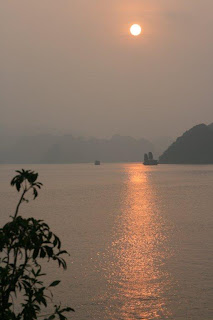 Ha Long Bay in Viet Nam is too beautiful. Even though it’s been designated a World Heritage Site, that hasn't helped to protect it from itself.

The geology nut in me has always wanted to see these limestone monoliths (1,969 to be precise) rising out of the South China Sea. And from all that I'd read and heard, it was easy to romanticize it. Clear, calm waters (calm is an important feature for someone like me who gets so seasick, I want to throw myself overboard and would be happy to drown), dolphins playing, unexplored caves, misty mornings and red-sailed junks increasing the wonder of it all. The wonder of imagining a 500 million year-old coral reef, the largest in history, made from unimaginable trillions, googols, in fact, of tiny crustaceans fusing to form a limestone mass so large that it stretched from Bali to Thailand. And then the elements and tectonic uplift taking 200 million years to carve this enormous mass into monuments to a primeval world that wouldn't recognize itself today.

The misty mornings still exist, though, in fact misty afternoons and evenings too, (it’s damp!), but the water isn't clear and the dolphins have long since left to be replaced by floating garbage. Oil skims the top of the water left by red sail junks now under power. The sails are just for show.

We left Hanoi in a tourist bus, which conveniently stopped at designated souvenir shops along the way, and arrived to admire the Vietnamese science of organizing world-wide converging tourists: stand in line; tickets checked; numbers called; walk in group to waiting ferry; motor to moored junk bobbing with other moored junks. Which one is ours? Hope it's that one over there. Oh, it looks as though we're headed for the little one with holes in. Let's check for life jackets as soon as we can. 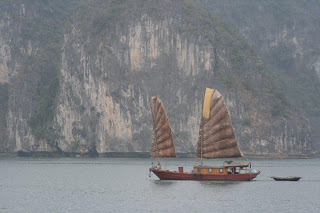 But even an ailing junk is made to feel like home by the Vietnamese courtesy and warmth. Lunch is a truly delicious and simple five course meal of fresh seafood, peppered with the anticipation of casting off. Slowly, slowly we head into the mist and the waiting giants. Three days without Wi-Fi and touching land.

We did touch land, of course -- but not with our feet. We touched it with our hands as we kayaked into caves covered with the fossils of millions of razor-sharp mussels. It's impossible to get a toe-hole on land because the monoliths (called karsts) rise like icebergs from the ocean floor. This is why the fishing villages are floating on foraged Styrofoam. 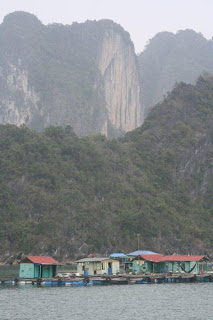 Recent inhabitants of Ha Long Bay (translated as Bay of the Descending Dragon), these resourceful people have formed communities in the lee of some of the more sheltered areas, all the better to be protected from typhoons, and are making a subsistence living and raising families. It’s easy to fall off these floating islands, so children learn to swim and row boats very early. They go to small school houses on their own islands of Styrofoam. As dawn breaks, the men head out in flimsy boats to fish in deeper waters. Some have created mussel and clam farms in buckets which we pass over in our kayaks. The young women of the villages row flat boats to the tourist junks offering sodas and Ritz Crackers. We buy some, of course, and ask for permission to take pictures. They shyly agree only then lifting their faces to us with beautiful smiles.

At night, our junk shelters in an 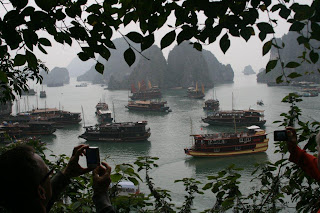 area surrounded by ancient karsts whose shadows are so deep they create a damp chill that makes our hot fish soup even more delicious. One by one, other junks maneuver into our space -- a junk parking lot. I have to admit that there is a certain comfort to this camaraderie as the karsts loom over us speaking to our transience and their permanence. In the morning, our young women are back in their rowboat but this time trying to gather up the floating garbage with long-handled fishing nets. I'm still mystified by this.

Back in Hanoi, I take a bath. The three-day dampness had chilled my bones. As I lie luxuriating in the water thinking of Ha Long Bay's tainted magnificence, I mull on the fishing villages and their beautiful women. Where do they get hot water so they can luxuriate in a bath? For that matter, where do they get any water at all? What do they use for lights? Do they ever see television? Where do they go on a date? Do they pay attention to the way they look or when survival is so difficult, does that matter? The mulling continues and then I remember that when our two mermaids had raised their faces for us to take their picture, there was a hint of makeup. Yes, there was. 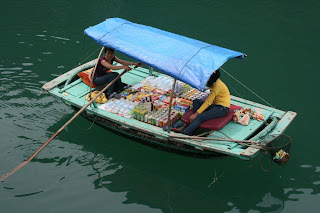 Posted by Jane Iredale representative at Friday, August 12, 2011 No comments: